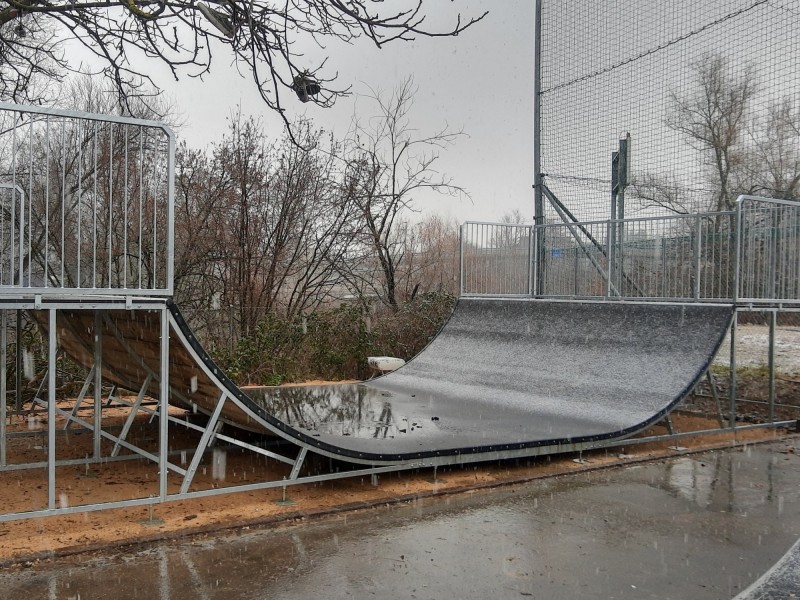 On June 17 in 2014 ten new skatepark obstacles were delivered to the city of Bad Dürkheim in Germany. The skate park is located at the Carl-Orff-Realschulhaus Plus, at the intersection of Wells Ring and Channel Street.

Vertical Technik AG’s installation team were received by city crew. Thanks to the top equipment on site the unloading and the installation of the obstacles went smoothly. Delivered were: a 1.5 m tall and 3 m wide Quarterpipe, a 2.4 m wide Roof Box with two Rails, one of them round and the other one square, a Handicap Gap and a 25° Bank 950 with a Curb. In addition, some custom made elements were delivered: A Banana Curb, a Granite Curb and a Step Curb with granite plates allow additional lines to be made. A height-adjustable Rail with an 80 mm diameter round pipe complements the skate park.
Part of the team immediately started with the assembly of the Quarterpipe. The other part unloaded the smaller skate modules and placed them on the course. The next day, the obstacles were optimally aligned and anchored to the ground according to the 14974 EN Norm. Together with the existing Midiramp a diverse skate park is now available for the Bad Dürkheim and surrounding areas’ participants, one that they have designed themselves.

As a Swiss company, Vertical Technik AG was delighted to be awarded with the contract. This shows that Swiss prices are competitive, despite the strong Swiss Franc currency.
We would like to thank the city of Bad Dürkheim for the trust placed in us. In particular, we would like to express our thanks to Mr Platz and the crew for the cooperation!