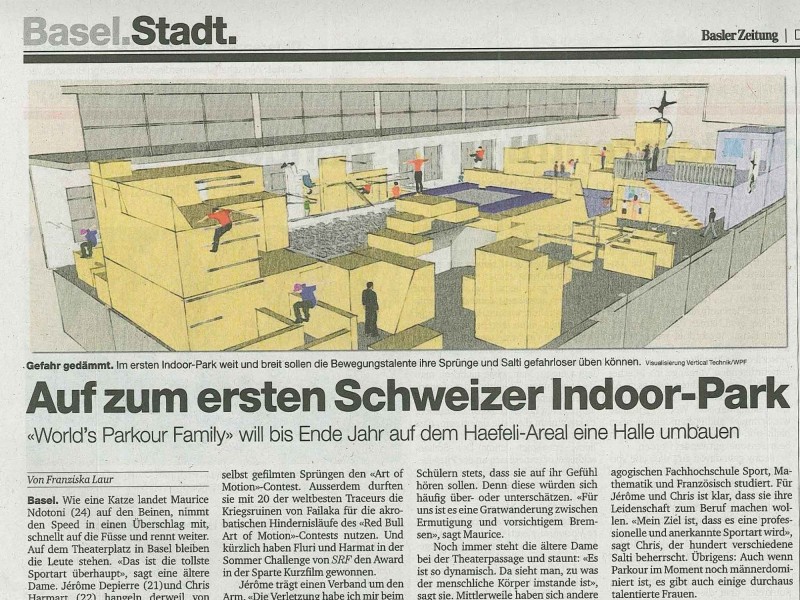 Vertical Technik AG has developed a Parkour hall in Basel, along with the World’s Parkour Family (WPF).

WPF has a reputation in the Swiss parkour scene and internationally: Kevin Fluri, Christian Harmat, Maurice Ndotoni, Jerome Depierre and Kevin Hediger are some of the top parkour athletes that are participating in this project. Global recognition is being gained through Facebook (with about 11 000 likes received) and the local media regularly reports on WPF. Despite great success, so far a year-round training has remained a challenge. With the new hall, this will change and the club invites all interested parties to support the hall project on www.wemakeit.ch.

1. Project description
The goal of WPF is to operate a hall with facilities for parkour in Basel, where different target and age groups can train year round. International Events with a contest character are planned annual highlights. Training camps and courses for trainers are also offered.

2. Update of the project in mid-June 2014
The project team has had weekly meetings since the project start in September 2013. At the meetings 3D plans were created by different project groups, goals were defined, tasks were allocated and results discussed. The 3D planning for the hall layout, the configuration plan, the price list, budget, schedule, media plan and sponsorship dossier are available and the project was launched on June 17, 2014.

3. Funding
The initial cost is around 350,000 francs including maintenance of the hall (cleaning and re-painting), as well as the fixtures. With its own start-up capital and donations from foundations, sponsors and crowdfunding www.wemakeit.ch the project is funded. The running costs such as rent, wages, repairs and replacements are covered by the revenues from admissions and memberships.

4. Target Groups
Parkour can be trained for a lifetime. Therefore, the target groups are not restricted to any age group. Training is offered to children, teenagers and adults. So far, the main interest is coming from children and 10-18 year olds, as well as students.

5. Timetable
It is planned to sign the rental agreement by the beginning of October. Confirmation and commitment of foundations and sponsors are awaited, however. Initial discussions with potential sponsors produced a positive feedback for support.

6. Location
At the Lehenmattstrasse 353 in Basel, House 12, on the former site of Emil Haefeli AG and close to the St. Jakob Stadium in Basel, a suitable building was found. The bus stop Ulmenweg of the 36 bus route is a two minute walk away from the hall; it’s also a five minute walk from the St. Jakob tram stop.

7. Infrastructure
The hall is equipped with Parkour-specific assets such as walls, poles and other structures. A tumbling floor, two trampolines, a foam pit as well as a rail park are also planned. The know-how for the planning and development is guaranteed by Vertical Technik AG Frenkendorf, a company that designs skate parks and has designed facilities for the famous American skateboarder Tony Hawk in the USA.

8. Self-Work
Members of the WPF will be doing the cleaning and repainting of the walls themselves, during installation and assembly of the infrastructure. The existing wooden crates are recycled locally and converted into useful Parkour obstacles. The infrastructure will be built under the supervision of an employee of Vertical.

9. Offer
The offer is in Switzerland and unique in the three-country region. Besides members, individuals, as well as school groups and other clubs can utilize the services. Classes for ages 6-50 years are being considered (with no upper limit). Cooperation with the school sports is being considered, preliminary discussions are in progress. 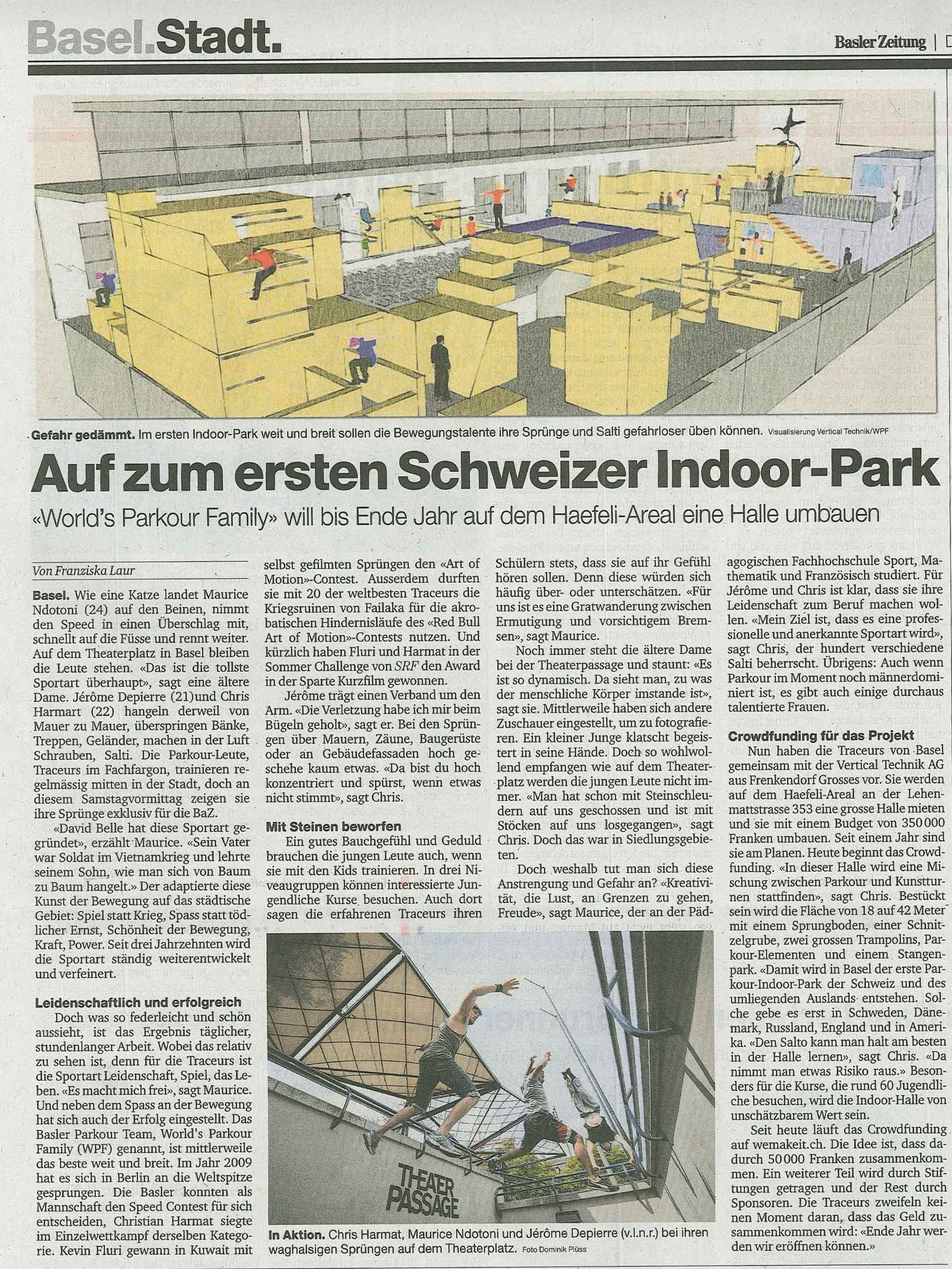