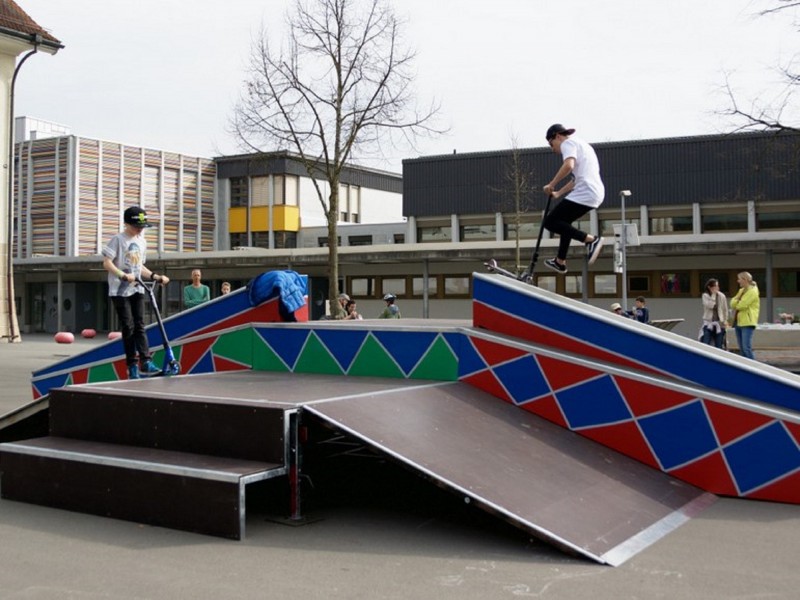 Over the years, the worn-out skate park no longer met the needs of the young people and was also technically outdated. We were asked to develop suggestions for improvement of the mobile skate park and the revision of the trailer. In winter 2015 the first workshop took place in Cham in order to capture the concerns and wishes of the young people. Thereby, it was important that the changes stayed in the financial framework of the budget targets and were technically feasible. At the workshop, it was decided that Vertical would visualize the changes in 3D and then present the new project. The suggestions prepared by us were then discussed by the young people within the youth work. After several feedbacks the final design was defined and the production could commence. Subsequently, the entire trailer was disassembled into its individual components in Vertical’s workshop.

Trailer revision
The vehicle was revised completely: New tires were fitted, the brakes were adjusted, wiring harnesses were replaced and the lighting was made fit. The supporting aluminum structure was checked for cracks and screwed together again. The steel frame was sandblasted and newly zinc-plated. The support wheel at the drawbar was also newly positioned, so that the fixture could better withstand the pressure.

Skate park revision
The radii were replaced with inclined planes and new ledges, as well as additional steps, were constructed. A new rail, a kicker and a new wheelie table now complement the skate park. In order to conserve asphalt areas, the condition of the transition sheets was improved by distributing the weight over several points. Contemporary dimensions and materials were used.

New construction street workout
The young people also wished for a pull-up bar and a dip bar so that they could stay physically fit. Thus, the street work out elements that have become fashionable again were positioned at the existing skate facilities.

Now the project was at the stage where the young people could be invited to our garage in Frenkendorf. This second workshop had the goal of upgrading the visible surfaces of the skate facilities with bright colors. The youth worked Jasmin Seeger arrived with the young people in order to paint the facilities. The colors were eagerly mixed and applied to the prepared surfaces. The young people prepared for the painting activities by carefully taping the edges with masking tape and coming up with a pattern for the coloring. Afterwards they had a lot of fun painting and designing. The following day we were revisited by the delegation from Cham with older youths in order to create a documentation for the installation instructions. For this purpose, the elements were photographed and notes were taken on how the trailer should be loaded. The goal of this activity was that the young people could create a manual themselves, which they could then use as a documentation with other young people for the installation and deinstallation process. The afternoon was used to repeat and discuss details of the project. From that moment, the young people were capable of independently undertaking the installation and deinstallation of the skate park. We would like to thank everyone involved for the realization of this great project. We had a lot of fun!