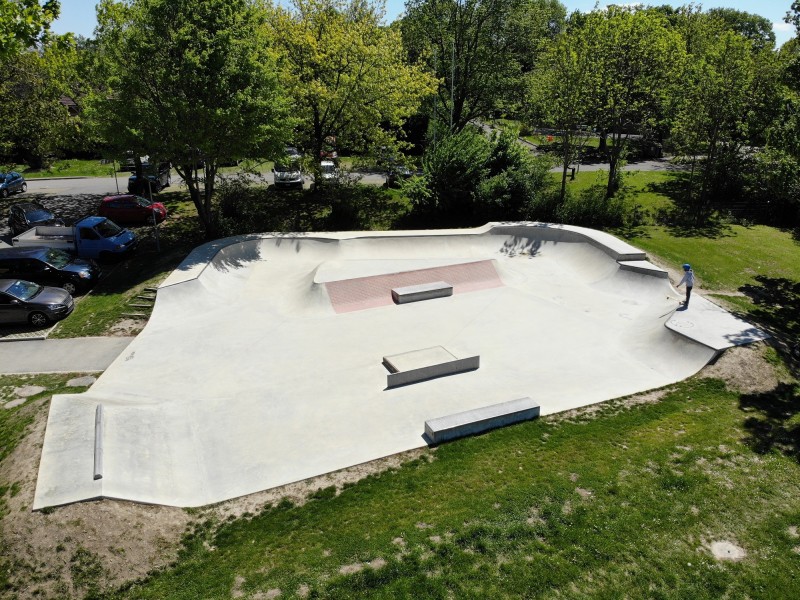 Vertical constructed a concrete skate park in Collogne-Bellerive near Geneva.

The skate park is located next to the cultural centre Epicentre. It extends across approximately 370 m2 and comprises a flow park and a street area. The flow park consists of curves, waves and hips. A pool coping made of concrete is built into the corner. In the street area, there are various curbs, among them two made of granite, a manual pad, a china bank made of red bricks, a hip bank with a granite-parking curb and a round rail made of massive granite. The entire set up is perfectly suited for beginners as well as experienced skaters.

Background of the project:
The Geneva-based association O.G. Skate contacted vertical in March 2016, in order to help shape the future skate park in Collogne-Bellerive. The city commissioned Vertical to carry out a workshop with the young people from the association, who already created a sketch of the project. The goal was to create a versatile skate park with a street- and flow park that is suitable for all skill levels. The china bank made of red bricks and the granite elements introduced a touch of originality to the project. Eventually, the project was commissioned at the beginning of 2017 and the construction work started in May.

We would like to thank the association O.G. Skate and the municipality of Collogne-Bellerive (and especially Mr. Lucchi) for their excellent cooperation during the entire project.