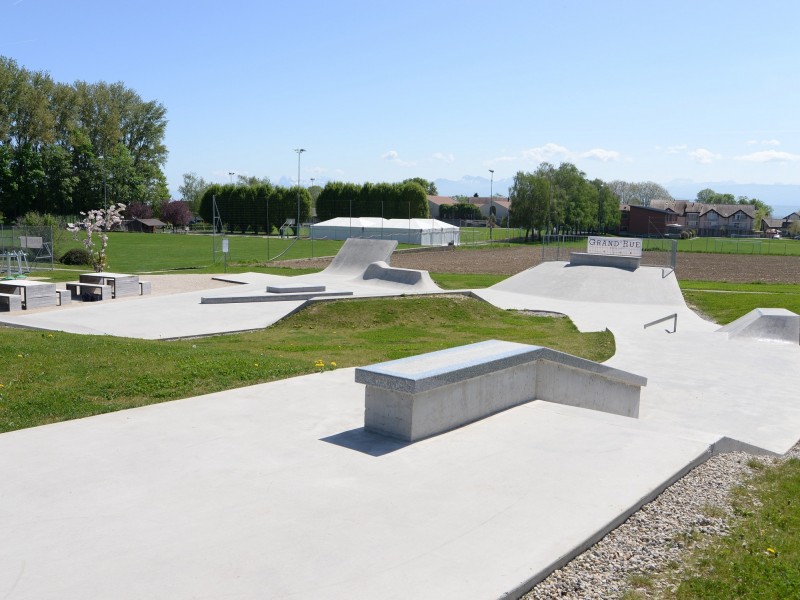 The construction of the concrete skate park in Crans-près-Céligny VD were completed at the beginning of November 2015. The skate plaza was implemented in the sports zone of the municipality at a distance of 100 m to the residential buildings.

The concept includes a round course, on which one can ride in both directions. The skate park was constructed on three levels, which are each equipped with different elements. The upper area contains a flatrail and two wobbles, from which one can either start northward or southward. To the south, you ride down a hubba with a polished granite plate and land on the second level. Subsequently one can chose between a handrail, a set of stairs or a bank on which one can perform ledge tricks. Afterwards you reach a flat hip bank with a concrete curb on the platform. From there one can either reach the pyramid, which is located to the side, or the granite steps. When going northward from the top level one either takes the handrail facing left or the one facing right, in order to then ride down the bank with a wallie or a flip trick. Afterwards the 40° steep bank, which has a nice and large radius at the bottom, can be reached via the granite steps. The bank offers a chance to ride up forwards and down fakie in the direction of the granite steps. It also functions as a run-up to reach the London gap or perform flip tricks. Positioned across from the riding direction, there is a small hip quarterpipe with a mini wobble, which can be great fun to ride.

Concept
With this skate park a new concept was implemented, which is unparalleled in Switzerland. The skate plaza, which is surrounded by a lot of green spots, corresponds to the ideals of the local street skaters. A picnic plaza with tables and benches will be installed as soon as the gardening works are completed. Three devices aimed at improving flexibility and coordination are located directly next to the skate park. These will rather appeal to elderly people, but it can be expected that the young people will also have fun trying them out. The interesting thing about this concept is that people from different generations will be able to spend their leisure time here. Here social interaction can develop. The circular trail with benches around the skate park offers the chance to watch and linger.

Timeline of the project
Vertical Technik AG received the request to provide an offer and a design during autumn 2014. After the municipality’s selection process, the design of Vertical was the favored design. The assignment was given to Vertical in early 2015, however the construction permit was delayed by an objection from a local resident. Since the distance between the skate park and the residential buildings was more than 100 m, the objection could be repealed without more ado. On September 28th the earthmoving work was started and the humus layer removed. A transport trail for trucks was constructed, a frost-free layer installed and the gravel bed was compressed. On October 12th the concrete construction work for the skate park commenced. Formworks and reinforcements were prepared, foundations and retaining walls were constructed and a hubba was cast. Afterwards, the elements were shaped and the surface built. The steep elements were sprayed on-site and smoothed by hand. Flat elements and surfaces were pumped. The construction work took 4 weeks, just as planned, and only included one rainy day. The temperatures were ideal for concreting and the quality of the surfaces was a perfect success.

We are glad that the skateboarders from the region received an innovate skate park, where they can spend their free time in a meaningful way. We would like to thank the skateboarders from the Crans City Skateboarding Association CCSA for their commitment during the workshops and for supporting our crew. We would also like to thank the municipality for the assignment and for the excellent cooperation.