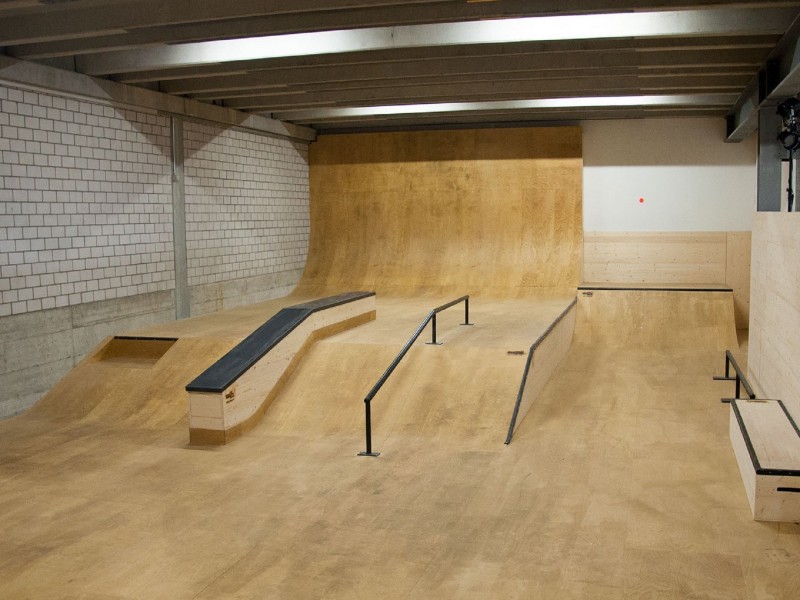 Vertical Technik AG has built a 450 m2 youth club with a skate park, climbing wall, music stage and dance floor in Ermatingen. A design workshop and an assembly workshop led to the goal.

Through the initiative and youth participation a 7m wide mini ramp with extension, a super Street Parkour with wall ride, banks, quarter pipes, a granite ledge, rails and a curb, and other obstacles were put together.
What makes this skate park special is that there are no metal plate seems between the ground and the obstacles of the street course. The obstacles and the ground surfaces are one. Therefore, the park has a great flow. The beech plywood riding surface is super-fast, which increases, once again, the quality level of the entire project.
The opening will take place on Sunday 16th November 2014; for more information see below. A skateboard contest where all are welcome will take place on December 6. W
e wish you all a lot of fun and thank the youngsters, teachers and the Municipality of Ermatingen for the cooperation. This was a commendable project!

Project details
Vertical Technik AG was commissioned by the Municipality of Ermatingen to conduct workshops with the youth and to create a youth club in a hall. From the beginning, the youngsters, the teachers and the youth workers should be actively involved in the project, in the planning stage and during construction. In 2013, the first design workshop in the Secondary Ermatingen School was performed. Under the direction of Paul Heuberger of Vertical Technik AG and the project initiator Beni Lenzin, eight youngsters participated in the design workshop. The first drafts were discussed and then the project of the future youth club was defined. The wishes of the kids flowed into the concept and the project was modeled in 3D on site. Following the Design Workshop, the design was revised in the Vertical Technik AG office, resulting in 4 different design variations. The final configuration was selected by the client and a building permit was requested.
On October 20, 2014, the construction of the project was ready to start. At 10 AM the youngsters met Beni Lenzin. There was a brief introduction of the parties, the press took pictures and Paul Heuberger spoke about the materials and the work ahead. After that, the participants were divided into groups and the assembly began. The same morning about 20 tons of material were delivered by truck, which was brought into the hall with a forklift. The wood came from domestic production, with an FSC quality control label. Four groups of kids between 13 and 16 years of age participated in this part of the assembly workshop, which lasted two weeks. During this time, teachers or youth workers were on site to guide and support them. For most of the kids, it was the first time in their lives they managed to do productive work that suited their skills. They learned how to assemble beams in templates screwed to the frame and then how to mount these frames into the construction. They also learned to align the frames with a level. They were shown how to create drill templates and then how to pre-drill the riding surfaces. The beech plywood surfaces were mounted mainly by the kids. They had to make sure that they put the heads of the screws exactly flush with the plates. Once the sheets were mounted, they were painted with a wood preservative to protect the surfaces. The work was performed in compliance with safety procedures. Professionals carried out machine work that has a higher risk potential. All participants were given goggles, hearing protection and dust masks. They were instructed to use the safety gear according to the situation. During the workshop, all participants benefited from learning about security awareness. In addition, luckily not one single injury or complaint was reported. The youngsters were made responsible for the supplying the materials. Their task was to bring the wooden beams and structural sheets with a plate trolley to the assembly site. The countertops were constantly kept clean by the kids, as it is customary in carpentry. At the end of each working day, the waste wood pieces were brought outside and disposed of.
In this 2-week assembly workshop, the youngsters were given an insight into a craft trade. It was a good opportunity to participate in a project that they built for themselves and for their colleagues. Thus, the motivation level was very high. The facilities were partially prepared by Vertical Technik AG in Frenkendorf to be assembled on site with the workshop participants. At the customer's request, individual pieces of furniture were made of wood and adjustments were made on the spot.
The youth club now consists of a skate park with a street course and mini ramp, and a mobile concert stage that can be built on the mini ramp. The great thing about this concert stage is that it is designed so that the kids can assemble it themselves and break it apart. The elements are mobile and can be stored in a drawer under the mini ramp. In addition to the mini ramp there is a 9 m wide and 3 m high boulder wall for climbing and a 80 m2 dance floor with a large mirror. A lounge with couches and a small snack bar invite you to be social. Of course, a real pool table and table football, are also available.