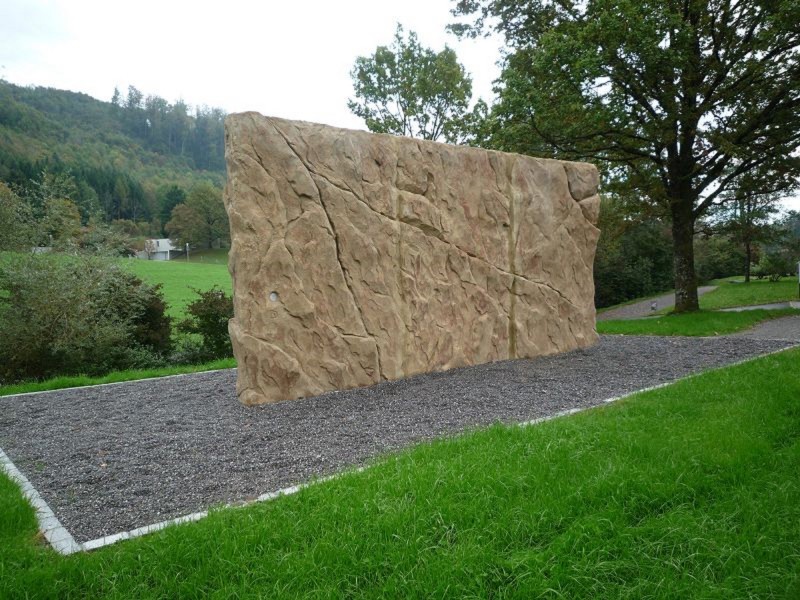 Vertical Technik AG was commissioned to construct a boulder wall. On 23.07.2014 the boulder wall ordered by the school administration was put up between the school buildings. Boulder wall at Hausen am Albis school.

At first the project was planned by Vertical and the local architect applied for a building permit. The construction work was tackled as soon as the building permit was available. A footpath to the climbing wall and an area on which the foundations would be set up was established. Simultaneously, the elements were created and, upon completion, delivered by truck. The elements, which weigh of 9 tons each, were placed on the foundations by using a pneumatic crane to lift them from the street over the stream and the trees. After alignment, the elements were grouted, which makes the climbing wall look like it was cast in one piece.
Finally, a fall-prevention zone out of gravel with a width of 2.5 m and a depth of 40 cm was installed in accordance with BfU’s guidelines. The climbing wall made of prefabricated concrete elements measures 6 m width and 3 m height. Due to the natural rock structure attached to both sides, it ideally fits into the landscape of the municipality Hausen am Albis.
The climbing structure without artificial climbing grips provides an optimal adhesion for climbing up and down.

Many thanks to the school administration for the great cooperation.