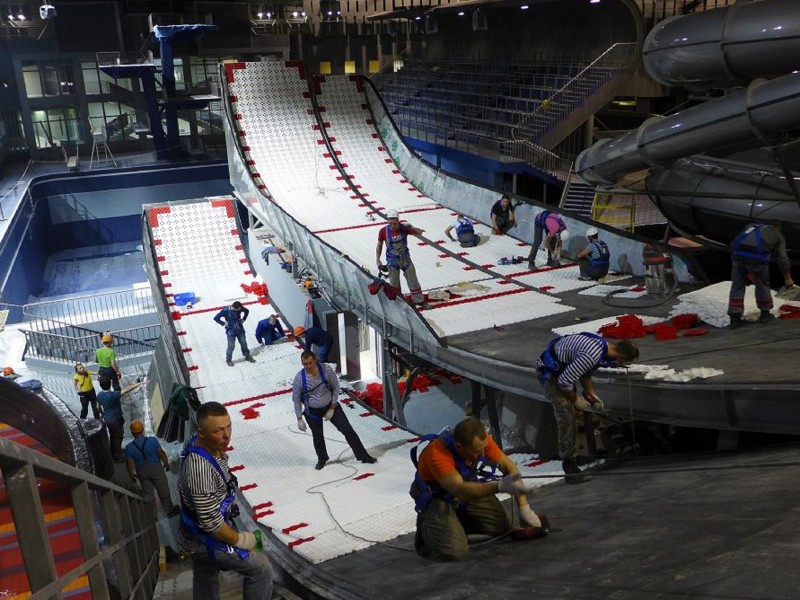 The best training facilities, a top coach and talented athletes - this is how Belarus dominates the Freestyle Aerial Skiing Scene!

The Freestyle Aerial Ski Team of Belarus (White Russia) won numerous medals at the World Championships and Olympic Games, most recently in 2014 in Sochi. At the beginning of the success story is the coach Nikolai Kozeko. He took over the Aerial Team back in the days of the Soviet Union. After Perestroika, he managed to lead the talented Belarusians to the top. There was a continuous investment in the modernization of the training facilities. In 2013 Vertical Technik AG delivered two ski jumps to the National Winter Olympic Training Center in Raubitschi, which is 20km away from Minsk. It is one of the world's best outdoor winter sports training centers. Nikolai however, had been dreaming for a long time of an indoor freestyle Center, to provide ideal training conditions to his team year round. Now his wish came true. The 2 million-inhabitant capital affords to have the world’s only indoor Freestyle center with a water jump, in a half sphere shaped hall.

Vertical Technik AG was awarded the contract to manufacture and deliver three ski jumps. In addition to a 2-fold and a 3-fold jump, a 1-fold jump with a hydraulic extendable extension was developed specifically for this job. The steel structures manufactured locally for the run up and the jump tables, on top of which the jumps should have been installed, had rough bumps though. Approaching them at speeds of over 70 km / h would have been impossible. A technical solution had to be found to meet the needs of the athletes as well as the environmental conditions of an indoor pool facility. Through the long-standing and extensive knowledge of Vertical Technik AG, a fitting solution was developed and delivered. Thus, the contract was extended to Vertical Technik AG, encompassing the delivery of all the run-up ramps and surfaces. Special sheets of Skateface® where glued to the existing steel structure with a special compound of epoxy resin. Through an in-house developed technique, the bumps were leveled. The entire run-up surfaces and the ramps were ready to be sheeted with synthetic mats. For that, a specific mounting technique was developed, in order not to damage the steel structure. Although the work had to be carried out on inclined surfaces with climbing safety gear, it only took 2 weeks to finish. Between 8 and 16 workers were working on it 12 hours a day. The opening of the hall is planned for spring 2015. We will be doing a follow up report about it.