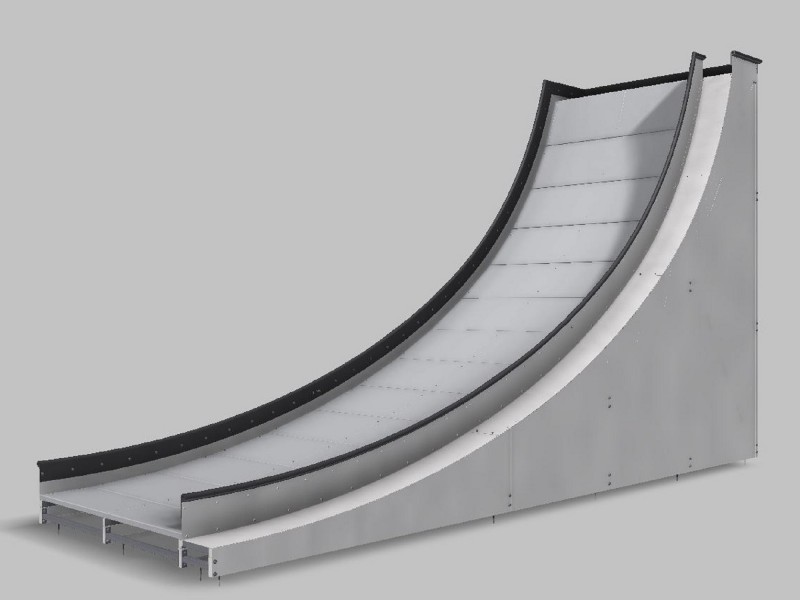 For the training centre Raubitschi near Minsk two new jumps were produced by Vertical in Frenkendorf for the ski freestylers. The double jump is used for double somersaults and is 4 meters high. The triple jump is 4.6 m, currently the highest jump in freestyle skiing and is used for triple somersaults. On these new jumps, many variations with corks can be made.

What is special about the jumps of Vertical Technik AG is that the shaping of the snow surface has become easier. The side edges of the riding surface were equipped with Vertical's own versatile and proven edge protection profile "P" made of EPDM rubber. This helps to define the curve well and is utilized by the snow shapers as a template. Clearly less time is required for the shaping of the new jumps. Because of that, the take-off area and the take-off angle are precisely defined and easily reproduced. The take-off surface can be refreshed during each session several times, which improves the quality for the riders.
The shape of the curve is not a simple radius, but a combination of different radiuses. The secret of this curve is in good hands with Michel Roth, the head coach of the Swiss Ski Aerial Team. The two jumps were developed with his cooperation and perfected during the manufacturing process. Now the Russians in Belarus have perfect training conditions to prepare for Sochi 2014. The jumps were built in a manner to eliminate vibrations that can occur during take-off. This robustness is achieved by Vertical's well-known construction. In addition, the jumps are anchored to a concrete foundation. During the summer, the ski jumps can be used for training with nylon mats.

What does "Freestyle Aerials" mean?
The discipline Aerials is also simply referred to as "ski acrobatics". Because it is pure acrobatics, what the aerial jumpers are showing. They catapult themselves up to 15 meters high in the air and rotate triple somersaults with up to five corks. The contest (World Cup format) consists of a qualifying jump and a final jump for the best 12. Five judges evaluate the execution in the air, two evaluate the landing. The total score is then multiplied by the degree of difficulty of the jump. Freestyle Aerials has been in the Olympics since 1994. Evelyne Leu won the gold in 2006.

We thank you for the pleasant cooperation with Michel Roth and with the coach of the Belarusian national team Sasha Penigin. For the upcoming Olympic Winter Games in Sochi RUS we wish the Belarusian and the Swiss Freestyle Arial Team Success!