Skate sculpture in the Olympic Museum 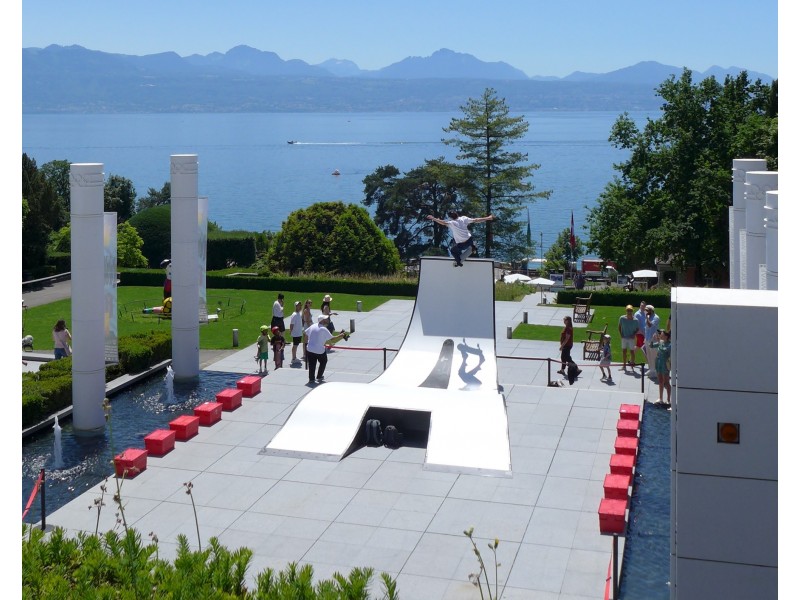 In front of the main entrance of the Olympic Museum in Lausanne, Vertical has placed a skateable sculpture called "The Giant" in June 2021.

The IOC decided on 4 August 2016 to include skateboarding in the programme. To give this sport a public presence, skateboarding was presented at the start of a special exhibition with an event on 11 June, for which a skateable sculpture was specially developed.

The Giant" was designed by the Berlin-based Swiss artist Rylsee, alias Cyril Vouilloz. A skateboarder himself, Rylsee became internationally known for his graffiti and graphics as well as his avant-garde approach.

Rylsee approached Vertical in March 2020 with his idea. He wanted to know if we could build a sculpture in the shape of the capital letter "A" with a wave and a vertical wall.

The criteria were to build a passable sculpture without visible struts, which is stable enough and "wobble-free". At the same time, the sculpture had to meet the visual requirements for the Olympic Museum's sculpture garden as well as the standards for public skate facilities EN 14974.

The Olympic Museum placed the order with Vertical at the beginning of 2022. This was followed by the design process between the artist and our skatepark designer. Nicolas Schneider defined the design including all details with Rylsee until the virtual object was perfect.

Subsequently, the 3D file was converted into data for production in our technical department. Cutting and bending programmes were created for our tube laser and for our profile bending machine. The profile steel tubes were then bent, laser-cut and welded in the workshop.

The entire construction was hot-dip galvanised and pre-assembled in the assembly hall. As with our classic skate facilities, pressure-impregnated wooden slats were screwed onto the construction as shaping and a riding surface made of Skateface panels was installed.

After pre-assembly, the art object was disassembled into its individual parts and prepared for transport. From 8 to 10 June 2022, the sculpture was erected according to plan in front of the entrance to the Olympic Museum in Lausanne. Our staff gave their all to assemble "The Giant" perfectly so that the skaters could inaugurate the sculpture on Saturday 11 June 2022. This task was not easy because it was pouring rain at times and the assembly took place with the museum open.

Opening of the special exhibition and inauguration of The Giant

On 11 June 2022, the inauguration of the sculpture took place in bright sunshine. Micky Iglesias from the association "La Fièvre" from Lausanne organised a show with some of the best Swiss skaters. Speaker Martin Chassigneux commented on the tricks and made jokes to create ambiance. Among others, Greg Ruhoff, Chany Changuenin, Noam Lichtenstein, Cedric Osterhoff and Jan Hirt were on site. The two Olympic participants Vincent Milou and Aurelien Giraud were also at the start. The skaters had great fun showing off their skills on the sculpture. The passers-by remained spellbound to watch the spectacle.

A big thank you goes to the whole team of Vertical Technik in the design office, in the workshop and on the assembly, who worked with great commitment for the success of this very special order.

We would like to thank Cyrill Aka Rylsee for the trust he placed in our company and for allowing us to implement his idea. At the same time, a big thank you also goes to the Olympic Museum, which commissioned us to develop and produce this object.

The sculpture can be viewed and driven on in the Olympic Museum's museum park until April 2023. With breathtaking views of Lake Geneva, the object is in good company with 43 other sculptures by renowned artists such as Niki de Saint-Phalle, Botero, Tapies and Calder.

Please note: The sculpture is not freely accessible at all times. Advance notice should be given to the museum for this purpose.