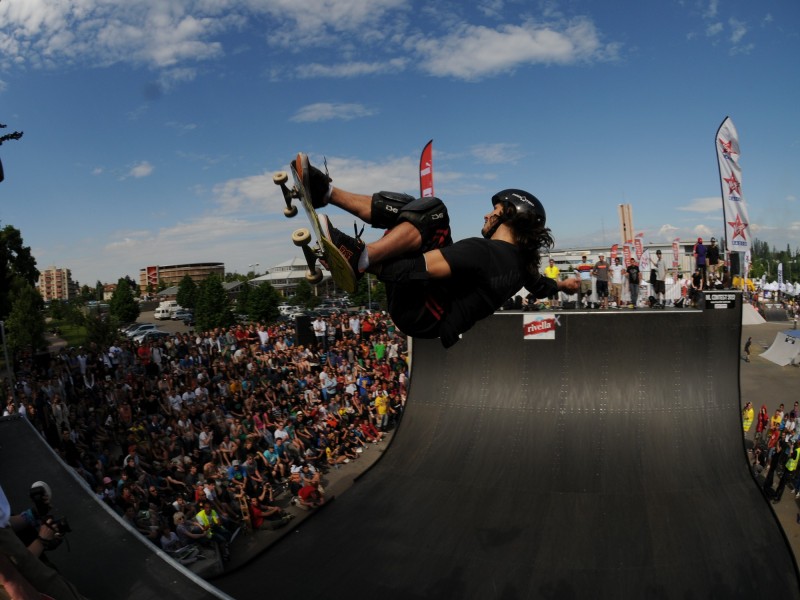 A new vert ramp with an extension has been built by Vertical Technik Ltd. in Strasbourg.

At 4.50 meters tall, it's one of the biggest permanent halfpipes in Europe, according to the new size standards. The riding surface SKATEFACE® has been chosen for its resistance to weather and its smoothness and speed. The new halfpipe is located at the "La Rotonde“ skatepark on "Rue Pierre Nuss“, near the indoor ice rink. Take the public transportation and get off at the "La Rotonde" station. The ramp was installed between May 17 and 21, 2012 and the opening day was the weekend of May 26, with the NL Contest.

NL Halfpipe Contest Strasbourg 27th of May:
The new halfpipe worked well as you can see in the photos. The field of skaters was split into 3 groups. Long time French pros like Terence Bougdour and Florent Viard both showed a lot of experience and did very good. Terence was making backside and frontside 540's in the same run and some high, easy going 360 tail grab airs. Florent did stylish frontside airs and a remarkably high nose grab backside air. Juergen Horrwart styled a very high tuck knee japan air and Renton Millar slapped down some incredibly high body jars and Cris Miller like, over tweaked lien airs. Sam Bosworth showed consistent runs at age 17 with a finger flip Mc Twist and clean heel flip 360's, amongst other tricks. Joris Brichet delivered some astonishing tricks which I must say I am not sure what they're called. Possibly a switch stance 360 finger flip and some other weird moves. He was putting down several solid Mc Twists, besides some different, unusual tricks. Jan Tomsowsky ripped some high airs, Steffen Busam showed some air time and a real hand plant. Franziska Stolz had enough muscle to grind and do some airs and this 40 year old guy from Montpellier showed some of his "good old skateboard tricks".
All in all the contest showed that there is a good level out there and that this new ramp works for amateurs and pro skaters as well. Renton said it was perfect for a permanent public ramp.

We'd like to thank all the riders who showed up this weekend to break in the new ramp. Thanks also to Christoph Neumann who organized the skateboard contest and to Julien Lafarge who set up the entire NL contest event. Last but not least many thanks to Roman Jeker from Vertical who led the set up crew of this new halfpipe and also many thanks to the local hands who made it possible to set up the ramp in less than 5 days.