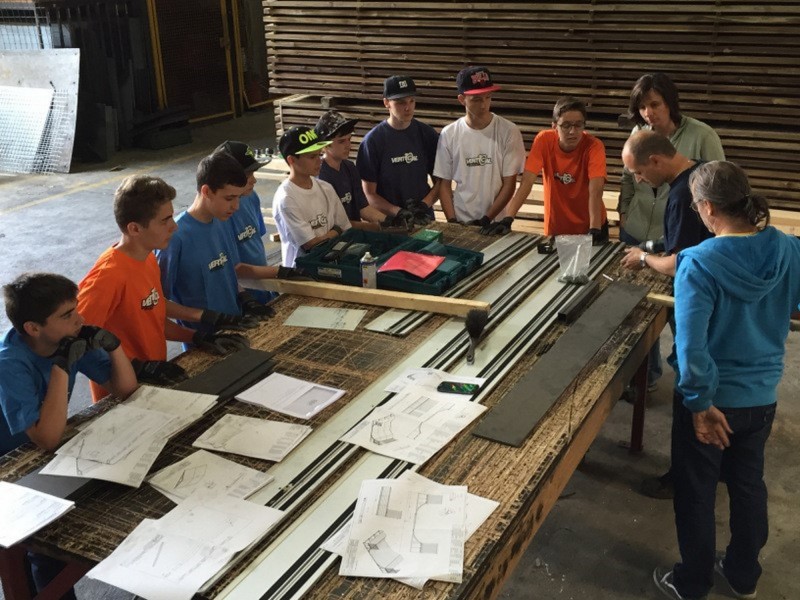 On May 22nd 2015 12 young people from Trimmis visited Vertical Technik AG in Frenkendorf with youth worker Sandra Hemmi. An order for a skate facility, which would be prepared and installed in the workshop mode, preceded the visit. Trimmis - New Miniramp via youth participation by workshop.

In the office, the visitors got an overview of the Vertical Technik AG’s areas of activity. The designer described his work in construction and in creating production drawings. The architect described the design of concrete skate parks and how photorealistic 3D images were created. On the basis of the plans for their own miniramp, the young people were taught about what should be kept in mind during the installation.

After a snack the work gloves were distributed and the youths became familiar with the work shop under the leadership of Roman Jeker. There the young people prepared the materials to be used for the montage of the microramp under supervision. Wooden beams, riding surfaces, sheets, steel structures and screw material - everything was counted, palletized, labelled and loaded onto the assembly vehicle. Thus, everything was prepared for the installation in Trimmis near Chur.

The installation started on Thursday May 28th at 8 o’clock in the morning. For this purpose, the young people were divided into two groups, which would consecutively take part in the installation. They helped energetically. A lot of screwing, hammering, drilling, adjusting and calibrating took place. The result is extremely gratifying. The microramp could already be tested in the early afternoon of the same day.

Many thanks go to the municipality and the school in Trimmis that financed the project alongside local sponsors. We would especially like to thank Heinz Hemmi from the secondary school and Sandra Hemmi from the youth work for their commitment to this project.
Everyone agreed that the involvement of young people in this project was meaningful. The feedback on the workshop with preparations and installation was consistently positive - we also had loads of fun!