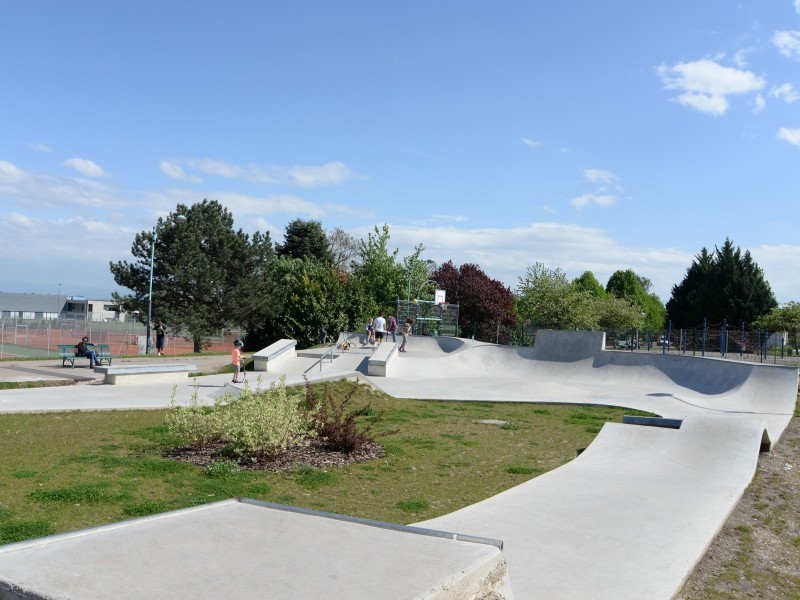 In the year 2015 the city of Vendenheim contacted Vertical Technik AG in order to design a new skate park made out of concrete. The steel modules from the year 2002 were outdated and no longer complied with the EN 14974 standards.

The ASEV (Association Sports Extremes Vendenheim) and the municipal council were involved in the development process, in order to create a lively place for all. For the ASEV, which is comprised of skateboarders, inline skaters and BMX riders, the goal was constructing a versatile skate park directed towards both experienced riders and beginners. The association regularly conducts lessons in the urban agglomeration of Strasbourg.
Thus, a skate park with a size of 290m2 was constructed, which consists of a street zone and a flow park. The street zone is arranged between two platforms and is equipped with a handrail, two hubbas, a London gap, a small wall, a manual pad and a flat, rectangular rail. Both platforms are separated by a curb and a pyramid. The large platform is connected by a large hip quarter pipe, which represents an extension. On the opposite side, there is a china gap next to a speed bump and another hip in the flow park. The arrangement of these modules creates an extremely fast route around the skate park. In the center and in the periphery of the skate park the asphalt has been replaced with a lawn. Two depressions on both sides of the field allow for a natural seepage of rainwater and prevent motor vehicles from accessing the skate park.
After creating the 3D concept and the execution plans, the municipality instructed Vertical Technik AG to supervise the construction work. The local construction company CDM was chosen to work together with the specialized Belgian skate park construction company Concrete Flow in order to get the job done. The construction work started on May 19th 2016 and was successfully completed on June 7th. The timetable could be met; thus, the skate park was opened at the beginning of the summer holidays, which was a pleasure for the young people. Our thanks go to the members of the municipal council, the ASEV and the young people for participating in the workshop. We would also like to thank the city of Vendenheim for their trust and the excellent cooperation during the entire project.
A big thank you goes to the companies and concrete flow for the high quality of their work.