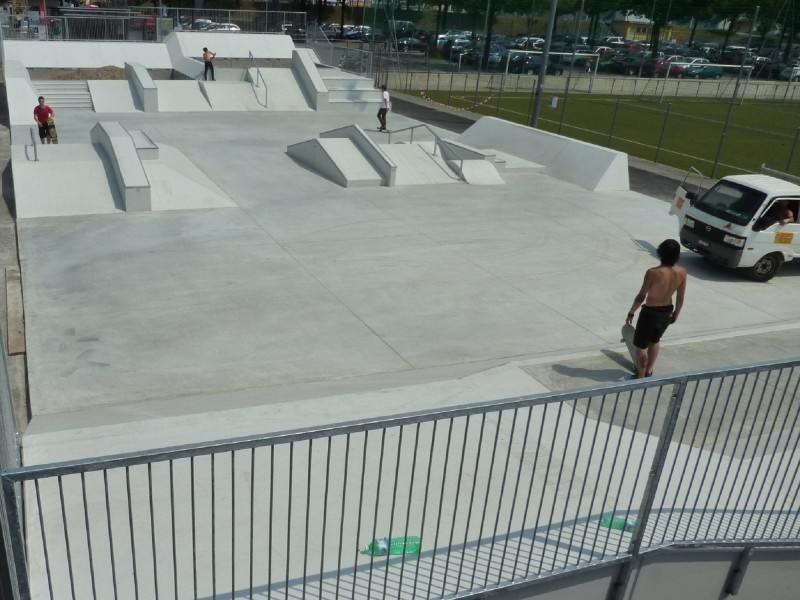 Vertical Technik Ltd put together a new cement skatepark with pre-fabricated concrete elements of the SkateStone brand. This new street skatepark was built next to the bowl of the current Lugano skatepark. The design was created by Yari Copt, of Warriors www.warriorsskateboards.com. The skatepark was ordered in early February 2011 and only 4 months later, it was ready for shredding. An admirable achievement of the German company Hofmann GmbH of Elsenfeld, the manufacturer of the concrete elements. We'd also like to compliment the production team and the set up crew on their diligence and dedication. As confirmed by the architect Armando Dorici the quality of the elements is at it's best. The concrete quality is C55/67 for all concrete elements. This means that there will be no cracks in the elements and therefore no maintenance costs. The joints between the elements were filled with a special resin which produces an absolutely seamless surface. No difference is noticeable when skating between the elements. The original ground surface which was asphalt, was replaced by 15 cm thick concrete slabs that were poured on site. This eliminated the need for metal plates between the obstacles and the ground, and produced a seamless integration of all the skatepark's surfaces. This increases the quality of the ride and matches the prefabricated construction quality to conventional, poured-on-site skatepark construction. This project allows Vertical Technik Ltd to start competing with conventional skate park builders in the market, as the quality of prefabricated concrete elements is higher than the quality of concrete elements poured on the jobsite. The prefab method also allows you to meet deadlines during construction, as the weather plays less of a role. The installation time is significantly lower. In Lugano, all elements were put together in 8 working days! Thus, the whole project is easier to calculate and the costs are kept under control. There are also no restrictions in terms of design: all the wishes of designer Yari Copt were fulfilled.