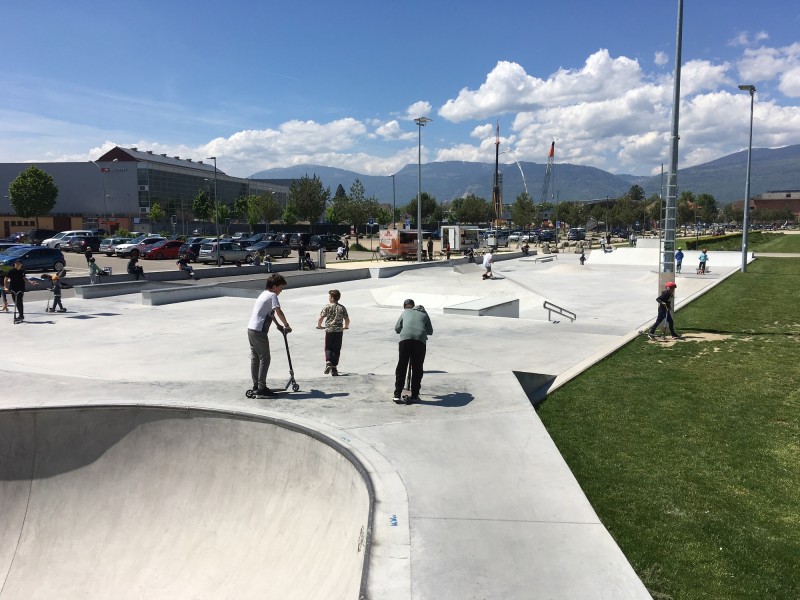 Yverdon is the northernmost town of Canton Vaud in Switzerland with about 30’000 residents. Since the 90s, the young people had to make do with an unattractive Skatepark who did not cover their needs. From the local skateboard scene a club called R.I.P. (Rider in Paradise) originated the purpose to realize a reasonable skatepark for the City.

Over the years, different locations were checked. The city presented one of the most beautiful places in the vicinity of Lake Neuchâtel available in 2014. So beautiful is the situation so difficult was the building of the project. From the above beaten costs of 1.7 billion CHF, around half were used for the preparation of the subsoil.
Being close to the sea, the water table is usually about the same height as the deep end of skate Bowl. At high tide, which rises with each heavy rain, it is up to 1.5 meters above the deep end level. This can create an enormous boost, so that the bottom plate of the entire skatepark is exposed to large loads.
At the beginning of the construction work we had great luck with the weather. The base plate has been designed as a waterproof pan with solid walls, where we should build the Bowl into it. Before we could start, the tub was filled with water from December 2015 to January 2016 in order to produce weight against a possible inflation. When we started with the marking work, the level had to be as low as possible. Otherwise the base plate could have a boost as we drained the water away. As said, we were very lucky and were able to integrate within a few days enough weight to counteract a possible flood of the groundwater level. The structure of the Bowl could not be done according to the classical construction method, where the digging of the Bowl in the ground would take place. The method was to pour concrete on the slab and to fill up the spaces with gravel. This was more difficult and costly than shaping the forms as usual. It took 600 m3 of gravel, 300 m3 lean concrete only to make the shapes. 80 m3 of concrete were used for the surfaces of the bowl. The Bowl is unique for Switzerland in its shape and in its equipment. South it starts with a 1.4 m high miniramp which is 6 meters wide. This goes on with a waterfall to the middle part, which has a hip to a 70 ° steep banked wall and has a loveseat on the other side. A Bowl corner is still between hip and loveseat. These elements are provided with a steel coping which is not galvanized to enable authentic Grinds. From the middle of the Bowl a waterfall goes to the deep end, which again has two hips left and right and a cradle at the end. This entire section is equipped with Viking Block Pool Coping from Sweden. The blocks were manufactured according to our plans, so that the radii are accurate and radical grinds with the associated sounds are possible.
The entire skate park is illuminated at night until 10 PM, which is an absolute highlight in Switzerland. A drinking fountain is situated at the entry between Bowl and Street. For viewers ample seating with pick nick tables and shade sails are available. Located next to the skate park is a public car park. The opening takes place with skateboard contest and concerts on June 18 in 2016.