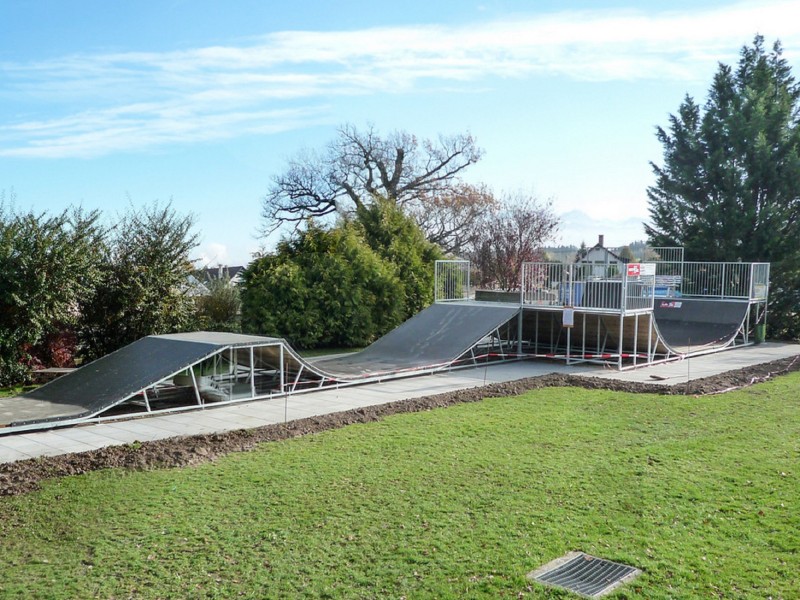 On October 15, 2014, the technicians of Vertical Technik AG, the municipality workers and the youth of Les Cullayes have assembled the new skateboard/scooter modular obstacles. The assembly took 3 days.
Initially the municipality organized the placement of concrete slabs to serve as the foundation of the 3 modules. Under the guidance of Roman Jeker, the installation went very well. The youth and municipality workers showed great commitment and helped significantly with the assembly.
The 1.4 meter tall mini ramp connects to a Pandora Box on one end. At the other end is the quarterpipe, which also connects to the Pandora Box. Thus, continuous back and forth riding is possible.
As soon as the riding surface was mounted, the kids could not pass the opportunity to skate it for the first time. Their time and efforts seemed to have paid off, when you looked at their expressions while they were skating!
With this uniquely conceptualized facility, Vertical Technik AG and the municipality succeeded in providing an attractive recreational opportunity for the youth of Les Cullayes and its surroundings.
Big thanks go to Mrs. Isabelle Lucas and Mr Ramoni of Les Cullayes who worked in the planning and implementation of the project.