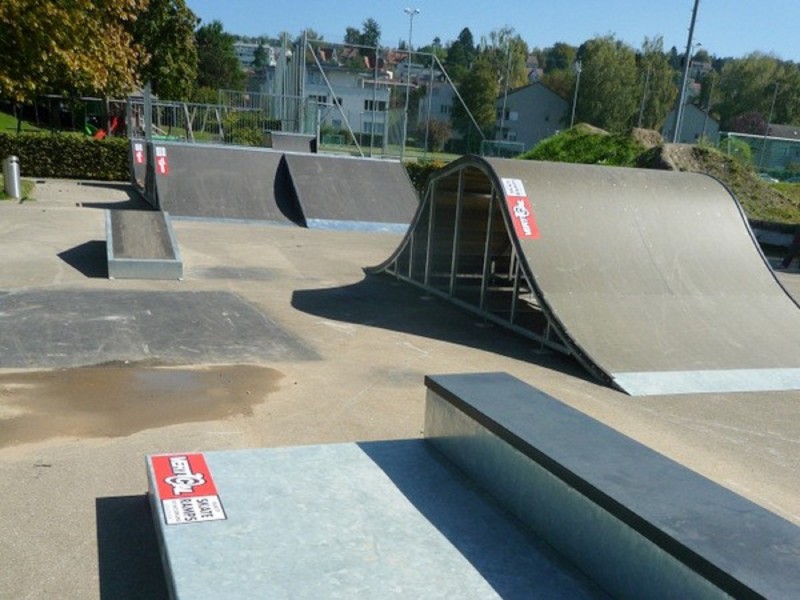 The town of Zollikon was in contact with Vertical Technik AG in Frenkendorf since 2009. The idea was to work out a concept to replace the aging modules of the skate park.
Vertical worked with the local park users like BMX ripper "Adu" from Zollikon to vote on design decisions and then visualized the concept in 3D. As a result, a 6 meter wide and 1.4 meter tall mini ramp was to be installed. The special thing about it is an extension and the side of the ramp connects to the streetcourse as a quarter pipe and bank. Thus, the mini ramp can be used as a start-up module to move towards the central Pandora Box module. In addition, a six meter wide 45 ° steep bank for tailslides was added as another run-up element. Other obstacles are two kicker jump ramps, a six-meter-long round rail, a Roof Ledge (roof-shaped module), a manual pad, a Stone Ledge and a curved trick box. This obstacle selection allows both simple and challenging lines. The skate park will again be a meeting place for the youth of Zollikon and its surroundings.

On Monday and Tuesday, September 22 and 23, the time had come. The assembly was led by Vertical Technik AG as an assembly workshop, where the skatepark users and participants volunteered their own service. It meant carrying boards and panels, tightening screws, cleaning surfaces and more. To the municipality, it was important to involve it’s youth in this project. The new skate modules have been installed correctly and in accordance to EN 14974 standards.

Big thanks go to Mr. Camichel and Mr Neuhäuser of the Town of Zollikon, who have worked together diligently with the participants on this project. Address: Skatepark Zollikon Sportplatz Riet Gustav-Maurer-Strasse 24 8702 Zollikon